The Easter Tablescape this year

As an Army Brat, an Officer’s daughter no less, one of my Mom’s jobs as so many other Officer’s wives was to entertain. We had lots of Cocktail Parties, Sit-Down Dinners, Luncheons and Teas at our home wherever we were stationed. That being said, I became interested at a young age in the art of entertaining. I also picked up one of my Mom’s habits that has defined me in oh so many ways! You see, just as my mother before me, with each and every social ocassion I host, I produce an “Index Card” that not only lists what I served, but what I liked, what I didn’t, who was invited and what notable occurances happened before, during or sometimes after. They became a historical record of sorts that through the years has served as a  remembrance for me of days gone by. I can tell you for instance that I made Chicken with Bell Pepper and Onion Confit (Bon Appetit September 2001 Issue) for my Mom’s  birthday dinner 3 days after the Attacks of 9/11. It is documented that my son had Hardee’s Chicken for four birthdays in a row (ages 3-6), yet by the time he turned 12 his tastes had become so refined that I prepared Pepper-Seared Tenderloin w/Horseradish Cream. According to my index card that same sweet boy used the “F” word in front of his grandparents at my Dad’s 80th Birthday (hopefully the Sausage Ratatouille I made buffered the shock). My index cards fit perfectly in a sweet pastel basket where 35 years of entertaining is recorded. I’ll admit, I’ve missed an ocassion or two here or there and some cards lack detail compared to others. By and large though, the cards tell a lot about my family’s past.

I have 204 recorded occasions. ( I know this is where you that know me are trying to tally how many parties you were invited to!)

I’ve hosted 18 Ladies Luncheons and Teas. The first one was the luncheon I had for my Bridesmaids in April of 1981 where I served my sure to be famous Ham and Egg Roulade which I have never made again! According to the card though, it was delicious and appeared in “Home Entertaining” magazine.

40 parties were Christmas parties (yes, some years I’ve had more than one) and remarkably I’ve had several Labor Day get togethers.

Of those Christmas/Holiday Parties, I served Shrimp Spread 22 times not to mention the countless other times as well. This brings me to the other portion of this post….

The ever faithful Shrimp Spread. This time made by my 88 year-old Mom just the other day.

Apparently not all families serve “our” Shrimp Spread as a matter of routine. I know for a fact that it became a family staple for us in 1969 when my Dad was stationed in Fort Sill Oklahoma. The “Guided Missle Department Cookbook” was a collection of recipes contributed by the wives and was housed in a two-ringed binder with a bright red cover and is where this coveted appetizer first appeared. Somehow my mom is no longer is in possession of this publication, but no matter as the glorious Shrimp Spread recipe has been rewritten, shared and republished many times over.  When friends come over for repeat visits they immediately look for the Shrimp Spread. Who knew canned shrimp (always use the tiny or broken, mushed up!) could be the base for shellfish heaven? I’ve shared the recipes more times than I can count and the recipe now appears in several local Cookbooks either submitted by me or a friend I shared it with. Amazingly, I poured through 60 Shrimp Dip/Spreads on the “AllRecipes” website and not a one was precisely the same as “ours”.

I’m not gonna lie, as I’ve written before, I don’t make ANY recipe exactly as written. In this case when I double the recipe (and I always double the recipe!) I adjust some of the ingredients upward (hint, hint you can always use a bit more egg). I use green onion and I truly believe fresh parsley is a must although I know one particularly picky friend of mine who loves this stuff uses onion powder and dried parsley.

Well used recipe card as you can see 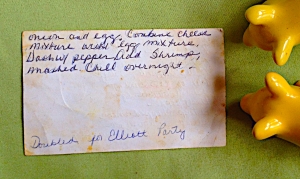 In my other life as a Contract Negotiator, we were constantly reminded that “documentation is key”. I strongly believe this is the case in our personal lives as well. Be it through writings, photographs, recordings, momentos or simply memories engraved in our minds, holding on to those experiences one way or another gives us a sense of family, friendship and belonging.

This blog post is dedicated to my dad who passed away on February 5 2016. A true Officer and Gentleman who shared my passion for collecting memories and experiencing life through his tastebuds. You will be forever missed. 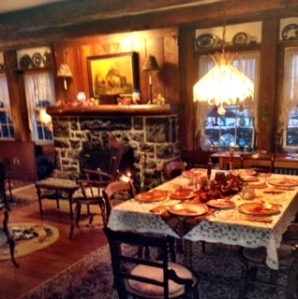 The table is set at my Dad’s beloved “Vintage”

6 thoughts on “History, It’s in the Making (or It’s all about the Shrimp Spread)”